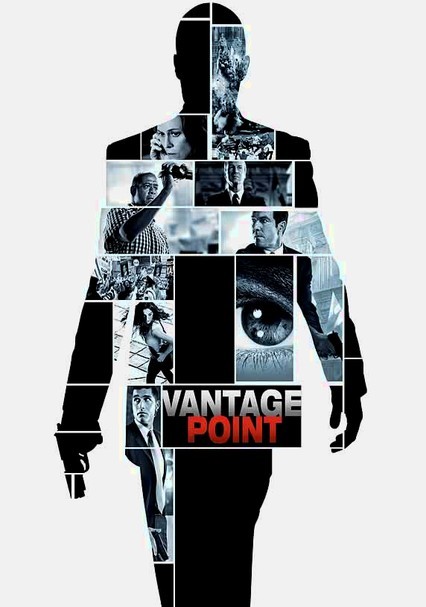 2007 PG-13 1h 30m Blu-ray / DVD
Moments after he arrives in Spain for an antiterrorism summit, U.S. President Ashton is shot. The 15 minutes leading up to the shooting are rehashed from the perspective of various onlookers: two Secret Service agents, a TV reporter and a tourist.

Parents need to know that some teens may be drawn to this political action adventure by its all-star cast of popular/award-wining actors (including Matthew Fox of Lost, Dennis Quaid, Sigourney Weaver, and Forest Whitaker). The film revolves around a terrorist attack on the U.S. president and features scenes of explosions killing a crowd of people, a suicide bomber detonating in a posh hotel's lobby, high-ranking officials being shot at execution-style, and other bloody deaths. Language includes words like "s--t" and "bitch"; it's worth noting that there's markedly less commercialism and drug/alcohol use than in comparable films.

A woman seems to be in a romantic embrace, but she's actually being handled roughly. She then kisses and hugs another man.

The U.S. president is shot at during a speech. Crowds of people die in an explosion set off by a terrorist; a suicide bomber detonates himself in the lobby of a hotel; terrorists kill several people execution-style and kidnap the president. A Cabinet member tries to force the president to bomb Morocco for harboring terrorists.

Secret Service agents act courageously in the aftermath of a terrorist attack abroad. An American tourist bravely puts his life in danger to save a young girl. Although most of the movie's terrorists are Muslims from the Middle East, there are American ones, too.

Nothing overt, except for an obvious CNN-like news channel called 'GNN.'

The president is sedated so he can be kidnapped.