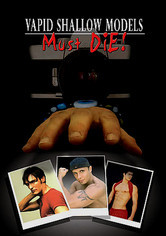 2006 NR 1h 30m DVD
When his dream of becoming a model is dashed, a pudgy, unattractive everyman takes gruesome revenge on the runway hotties he'd once hoped would be his high-fashion colleagues. Masquerading as a photographer, the humiliated (and mentally unhinged) loser lures his photogenic but vacuous victims into a deadly lair in this campy slasher flick starring Michael Haboush, Kate Crash, Stephen Molinaro and Jason North.