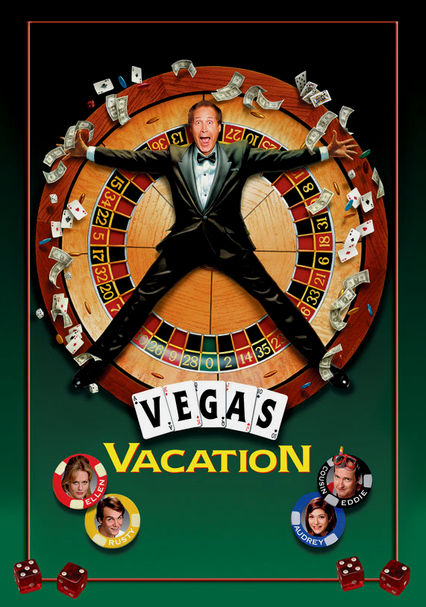 1997 PG-13 1h 38m DVD
In the fourth National Lampoon's "Vacation," the Griswold clan makes another attempt at a peaceful family trip, this time to Las Vegas, where gangly Cousin Eddie (Randy Quaid) rubs elbows with the likes of Sid Caesar and Siegfried & Roy, among others. Before you can say "Hit me," Clark (Chevy Chase) loses all his money playing blackjack; Wayne Newton puts the moves on Ellen (Beverly D'Angelo); and Rusty (Ethan Embry) masquerades as a high roller.

Parents need to know that in its the quest for humor and laughs, this film portrays everyone in the Griswold family as irresponsible, amoral, dishonest, and foolish. The Griswold teens either drink, cheat, steal, gamble, or lie throughout. The entire Las Vegas environment is seen as obsessively sensual, tawdry, and alcohol-infused. In fact, many of the leading characters are seen continuously holding or drinking alcoholic beverages. In addition, the film functions as a lengthy commercial for the city's hotels and hot spots, along with lots of other product placement. Language is relatively mild, with some "damns," and "hells." In addition the film teems with sexual innuendo, as well as much leering and ogling at scantily clad women.

No overt sexual behavior, but lots of innuendo in dialogue and male leering at scantily dressed women and plunging necklines. The Griswold parents make an effort to join a "certain club" that is never identified, but then try to squeeze into a airplane toilet for fruitless attempts at romance. One bizarre character kisses his daughter (identified as a stripper) on the lips a little too intently. Generally, Las Vegas is portrayed as a very sexually-obsessed vacation spot.

Clark Griswold steps out onto a ledge high above Hoover Dam, then climbs a derrick. He's never in serious danger.

Few swear words: "hell," "Goddamn," "kick you in the nuts." An entire scene is played for laughs punning "damn" and "dam" as in Hoover Dam. A sign identifies a strip club as "Club Aereola."

Bad behavior has few consequences, though it's pretty obvious that the characters are making the opposite of appropriate choices. The pursuit of pleasure takes precedence over rational thinking and doing the right thing. There are lots of ways teens find to get around rules and laws (lying, fake IDs, payoffs).

A veritable ad for Las Vegas tourism, its hotels and nightspots. The Mirage Hotel is a key location and identified in many scenes. Other locations and products: MGM Grand, Riviera, Nieman Marcus, Marlboro Lights, Dunkin Donuts, Yuban coffee, and more. One character carries a can of Busch beer every time he's on camera.

Lots of casual drinking. Characters, including some underage teens, consume alcohol in nearly every social setting and there is some teen drunkenness. The Griswold's cousin carries a can of Busch beer (or another alcoholic beverage) every time he appears and he always appears to be under the influence. Some cigar smoking.