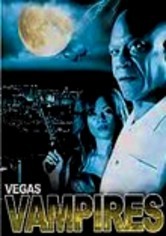 2004 NR 1h 29m DVD
A series of brutal murders at several top nightclubs have left the Las Vegas police department baffled. But when they discover that the killers are a group of bloodsucking vampires led by Q (Alex Wilkinson), it's everything they can do to prevent the information from reaching the public. Former blaxploitation star Fred Williamson directs and also co-stars alongside Daniel Baldwin and Glenn Plummer.