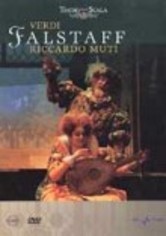 2001 NR 2h 5m DVD
In 2001, the city of Busseto, Italy, was the site of numerous events to commemorate the century mark since composer Giuseppe Verdi's death. One of these events was a performance of "Falstaff," Verdi's last opera before his passing. Conductor Ricardo Muti and director Ruggero Cappucio took the reins for the special presentation that featured singer Ambrogio Maestri in the lead role and tenor Juan Diego Florez in the role of Fenton.