Verdi: The Pursuit of Success & The Burden of Success 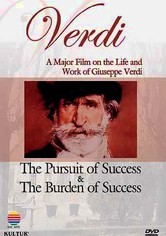 Verdi: The Pursuit of Success & The Burden of Success

1994 NR 1h 58m DVD
One of the most influential composers of the 19th century, Giuseppe Verdi is a giant in the world of Italian opera, and though his works were created more than a century ago, they're still widely performed and celebrated throughout the world. Narrated by conductor Mark Elder, this fascinating documentary takes viewers to many of the locations where Verdi lived and worked and presents highlights from some of his most popular operas.