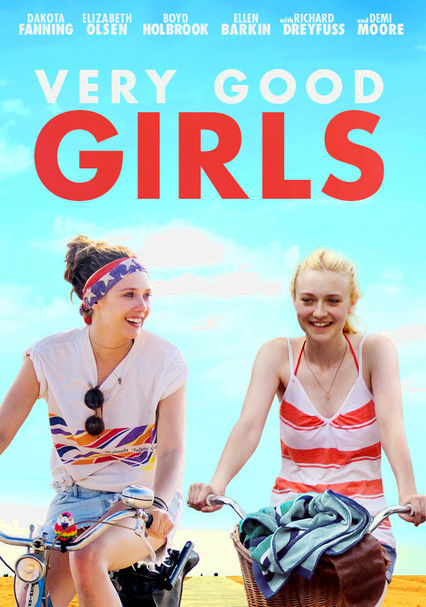 2014 R 1h 31m Blu-ray / DVD
In their last summer before they start college, best friends Lilly and Gerry make a pact to have sex and lose their virginity. But their bond is put to the test when they both fall for the same boy.

Parents need to know that Very Good Girls is an indie coming-of-age drama starring Dakota Fanning and Elizabeth Olsen as best friends who hope to lose their virginity before starting college. Sex is a major theme of the movie -- who's having it and with whom (both girls fall for the same guy, and a father is caught cheating on his wife). There's some partial nudity during a skinny dipping scene (the two leads are shown running into the surf from behind), and while there are sex scenes, since they're pretty dark, you see skin and kissing and hear moaning, but there's no graphic nudity. Expect some swearing ("s--t," "f--k," and more) and underage drinking. But there are also lessons for teens about the importance of honesty in relationships, whether they're marital, romantic, or friendship.

Sex is a major theme of the movie; the main characters' goal is to lose their virginity before college. Some partial nudity as the girls run naked into the beach (a brief glimpse of bottoms, backs, and the side of breasts). Several love scenes, but most are dark, so viewers see skin and limbs and hear moans and other noises, but there's no clear nudity. The girls discuss wanting to have sex, and then one exaggerates about doing it, but the other keeps her love life to herself. A daughter discovers her father making out with a woman who isn't his wife.

The overall messages are that best friends should be honest with each other and that it's not a wise idea to lie or manipulate others. Lily's behavior and choices make it clear how destructive dishonesty and playing with emotions can be, particularly when dealing with a best friend and a significant other. Another valuable lesson is that sex and jealousy shouldn't be used as weapons against people.

Brands/products seen include Mercedes and Coke.

Underage young women drink in the company of other underage but out of high school friends and, in one case, with a much older boss.