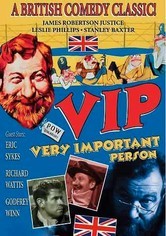 1961 NR 1h 30m DVD
Set during World War II, director Ken Annakin's mordant British comedy stars James Robertson Justice as a cantankerous, conceited scientist who's incarcerated after his plane is shot down in enemy territory. When his fellow prisoners discover that his radar invention is of strategic importance, they conspire to help him escape at all costs. The supporting cast includes Leslie Phillips, Stanley Baxter and Eric Sykes.