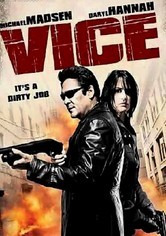 2008 R 1h 38m DVD
Michael Madsen stars as Max Walker, a down-and-out cop who becomes the target of a bloodthirsty drug cartel after he leads a narcotics bust to intercept a large shipment of heroin. When someone starts picking off his team members -- and the drugs seized in the raid suddenly disappear -- Walker pairs up with one of his detectives (Daryl Hannah) to uncover a conspiracy that may go straight up the chain of command.