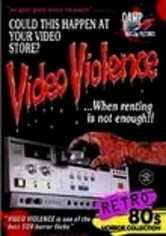 2007 NR 3h 36m DVD
Two 1980s cult classics reveal the dark side of home video rental in this twin bill of horror. In the original Video Violence (1987), husband-and-wife entrepreneurs move to a new town to open a video store and soon discover that their customers have "killer" taste. The sequel, Video Violence 2 (1988), finds the murderers from the first film more prolific than ever -- and hosting a creepy television show on the public access channel.