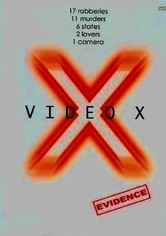 2001 NR 1h 41m DVD
Video X captures, in faux cinema verite style, young sweethearts Dwayne and Darla-Jean from the moment they depart their Kentucky hometown driving down interstate highways onto a terribly wrong path, where events quickly spin -- murderously -- out of control. As the footage reveals, there could be no return for the youngsters. This footage, presented here in unedited original running time, was initially claimed "non-existent" by authorities.