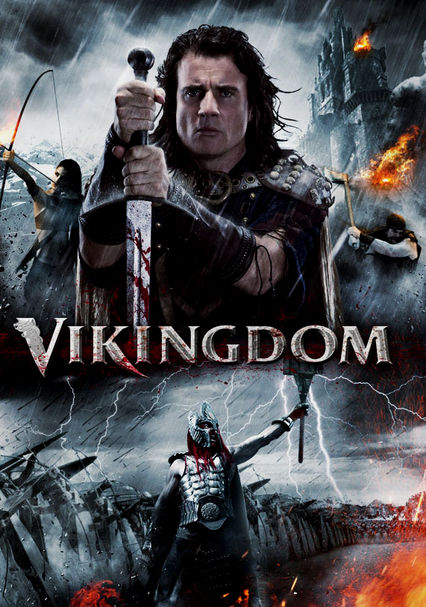 2013 NR 1h 54m DVD
Armed with the mystical power of Odin's Horn, Thor is poised to conquer the world, and only a forgotten Viking ruler named Eirick stands in his way. Against impossible odds, Eirick attempts to retrieve the artifact and save his people.

Parents need to know that Vikingdom is a 2013 medieval fantasy movie filled with near-constant medieval fantasy-style violence. Characters are constantly doing battle with swords, axes, and arrows and are shown being killed in many ways with these weapons. Some of these instances are quite graphic -- a man is shown getting his eye plucked out of its socket, another man has his arm chopped off by an ax, and a man is killed as an arrow shoots upward through his jaw and out his forehead. There also is occasional use of the F-word, as well as some other profanity. Early in the film, a man is shown urinating outside his village.

A woman tries to seduce a man by removing her robe. She is shown from the back. Later, there's a brief love scene between these two where the side of her breast is shown. In a different scene, hordes of scantily clad women beckon a man to them.

Frequent medieval fantasy-style violence. In the many battle scenes, characters are killed by arrows, axes, and swords. Characters are shown getting their arms chopped off by axes or stabbed through the head with arrows. A man's eye is ripped out of its socket by the god Thor. A priest is shown left for dead, crucified on a cross in his church.

A character is told by another character that he "stinks of f--kin' bear s--t." Occasional use of the F-word throughout, as well as "bastard" and "hell."

Although notions of heroism are on full display in the action and speech of the characters, this movie is little more than a bunch of medieval battle scenes and therefore doesn't have much in the way of positive messages.

Characters drink wine and mead but do not necessarily act intoxicated.