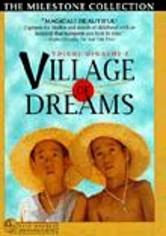 1996 NR 1h 52m DVD
Pastoral Japan serves as the backdrop for this delightful film based on the autobiography of children's book illustrator Seizo Tashima and his twin brother, Yukihiko. Set shortly after World War II, the movie chronicles the pair's exploits as 8-year-olds (played by Keigo and Shogo Matsuyama). With an undercurrent of growing pains, the twins do what boys typically do: skinny-dip, go angling and cause mischief as they explore the world around them.