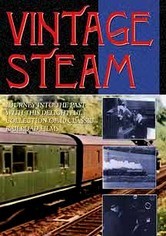 2007 NR 1h 46m DVD
Presenting remastered versions of rare vintage films, this compilation of short British and American railroad movies -- most of which have not been seen for decades -- is a train enthusiast's dream. Titles include "Five Midwestern Railroads: In the Days of Steam," "Steam Locomotives in Action on the Pennsylvania," "Footplate Express," "When Steam Was King," "The Flying Scotsman Runs Again," "Hudsons of the New York Central" and more.