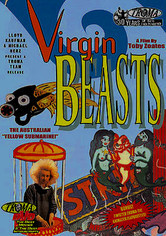 2005 NR 1h 10m DVD
Animation and live action careen into each other as the citizens of Sydney, Australia, attempt to survive after a nuclear war. Unfortunately, the evil Dr. Turd and his sidekick, Sir Blow, have seized power and now control the country. Annoyed by the surfers who ride the postapocalyptic waves on Sydney's beaches, Turd and Blow sic their deadly virgin beasts on the free-spirited dudes, who subsequently stage a rebellion. Toby Zoates directs.