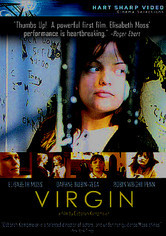 2003 R 1h 56m DVD
Defiant teen Jessie Reynolds (Elisabeth Moss) struggles to discover her own spirituality despite the strict Baptist teachings of her mother (Robin Wright Penn) and father (Peter Gerety). After spending a drug-and-alcohol-filled night with young Shane (Charles Socarides), Jessie has no memory of having sex with him. When she finds herself pregnant, she's convinced she's carrying Christ's child, upsetting her parents and her devout community.