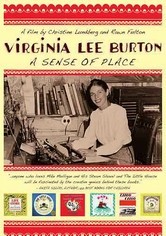 2008 NR 1h 27m DVD
The career of Virginia Lee Burton, the beloved author and illustrator of Mike Mulligan and His Steam Shovel and The Little House, is chronicled in this disarming collection of archival images, personal documents, sketchbooks and interviews. The documentary also covers Burton's accomplishments as a textile designer and co-founder of the Folly Cove Designers. The charming portrait of this 20th-century Renaissance woman originally aired on PBS.