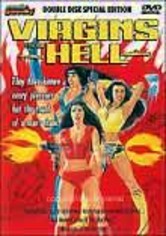 1987 NR 1h 34m DVD
A chaste all-girl biker gang vows vengeance on the drug lord that did them wrong in this kinky Asian exploitation film. The gang goes after Mr. Tiger for selling drugs to kids, but instead, he gains the upper hand and holds the biker chicks captive, using them as guinea pigs in his aphrodisiac experiments conducted with the help of his sadistic lesbian associate. But Mr. Tiger soon learns he's no match for the virginal vigilantes.