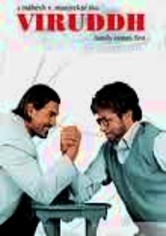 2005 NR 2h 12m DVD
Bollywood icon Amitabh Bachchan stars in this gripping drama about two parents who take a stand against a corrupt political system in the face of their son's tragic death. When their rebellious son, Amar (John Abraham), is killed after trying to intervene during a crime, parents Vidyadhar (Bachchan) and Sumitra (Sharmila Tagore) set out to clear his name and ensure that the killers are brought to justice. Sanjay Dutt and Anusha Dandekar co-star.