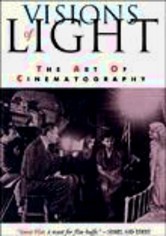 1992 NR 1h 32m DVD
Motion picture photography, or cinematography, gets its due in this documentary. This film features DP (director of photography) camerawork in movies from the 1930s to the end of the 20th century, including looks at Citizen Kane and The Conformist and clips from more than 100 other films. Thanks to interviews with some celebrated DPs, movie fans learn about the changes in film with each new invention, including sound, color and widescreen.