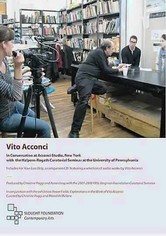 2007 NR 1h 14m DVD
New York-based artist and architect Vito Acconci talks to undergraduates in the University of Pennsylvania's art history department in this stimulating conversation recorded during the 2007-08 academic year. Over the course of the talk, which was filmed inside Acconci Studios in Brooklyn, Acconci discusses the politics of public spaces as well as his own philosophies about the intersection of modern design and instability.