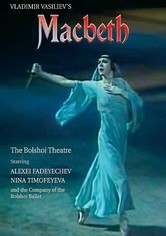 1980 NR 1h 37m DVD
Filmed live on the stage of Moscow's historic Bolshoi Theatre, this adaptation of Shakespeare's captivating masterpiece features choreography by the legendary Vladimir Vasiliev and music by renowned composer Kirill Molchanov. Alexei Fadeyechev stars as the conflicted title character manipulated by his ambitious wife (played by Nina Timofeyeva), and plagued by the inescapable guilt of his devious transgressions.