Voice of Firestone: Robert Merrill: In Opera and Song 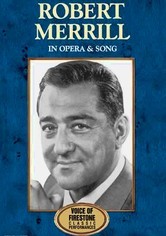 Voice of Firestone: Robert Merrill: In Opera and Song

2008 NR 1h 45m DVD
After more than two decades on radio, "The Voice of Firestone" became a television sensation. This compilation features opera and musical theater star Robert Merrill, one of the show's greatest performers, in rare original broadcasts. Highlights include "On the Street Where You Live" from "My Fair Lady," selections from "Il Trovatore," "Carmen," "Pagliacci" and "The Barber of Seville" and standards such as "I Only Have Eyes for You."