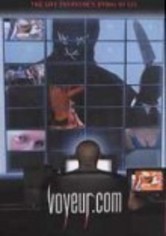 2001 R 1h 35m DVD
Two enterprising young capitalists concoct a plan to make a fast buck with a voyeuristic webcam -- until a bloodthirsty killer infiltrates the set, begins picking off the nubile "stars" of the show and broadcasts the slayings over the Internet. Travis Shakespeare and Adam Weiner play the randy dot.com entrepreneurs in this steamy thriller also starring Jena Romano, Vanessa Nachtmann and Tawnya Richardson.