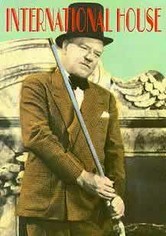 1933 NR 1h 7m DVD
A delightful potpourri of 1930s film icons (led by W.C. Fields) parade through this wacky comedy in which a mélange of characters converge on an opulent Asian hotel to place bids on a new invention called the radioscope, an early form of television. George Burns and Gracie Allen are perfect foils for Fields, and Bela Lugosi -- in a rare comic role -- plays a sly Russian who stirs up trouble. Crooner Cab Calloway sings the memorable "Reefer Man."