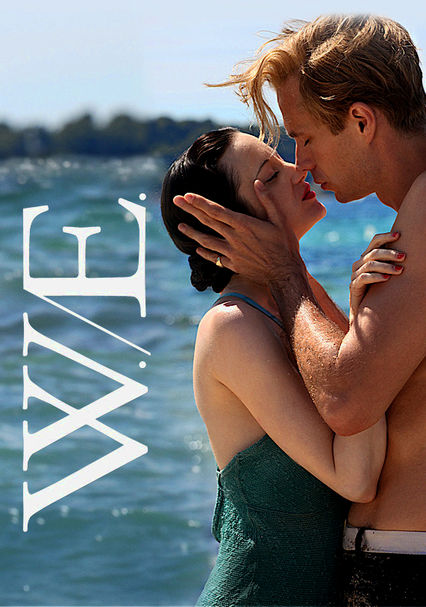 2011 R 1h 59m Blu-ray / DVD
This glossy ensemble drama juxtaposes the lives of famous divorcée Wallis Simpson and Wally Winthrop, a young 1990s housewife. Wally yearns to have a romance as dramatic as Wallis's but soon discovers that history can be misleading.

Parents need to know that Madonna's directorial debut tackles some mature issues that aren't appropriate for younger teens. There's considerable marital abuse; the two main female characters both have husbands who strike them viciously, and in one case the physical abuse leads to a bloody miscarriage. There's nearly full-frontal nudity in a brief bath scene, plus several love scenes (though no additional graphic nudity) and shots of the two main actresses wearing only underwear/lingerie. Strong language includes "f--k," "s--t," and "c--t." Despite W.E.'s adult themes, it does have one important message: Never stay in an abusive relationship.

The movie opens with a bath scene in which viewers see a character's breasts. A few love scenes show lots of skin, but no additional shots of sensitive body parts. Wallis and Wally often strip down to their bras and panties or chemises.

There's a disturbing amount of domestic abuse in the story. Wallis is severely beaten by her first husband; she's kicked so hard that she miscarries (blood is shown pooling around her naked body). Wally's husband also beats her after a fight escalates into physical abuse. Wallis slaps Wally.

It's hard to find positive messages in a movie about marital issues, adultery, and obsessive love, but there is one very important take-away: Women shouldn't stay in relationships where they're physically abused.

Luxury brands such as Cartier, Jaguar, Chanel No. 5, Burberry, and Sotheby's, which is one of the movie's main settings.

In both the '30s and the '90s, the characters chain-smoke cigarettes. Wallis and Edward are rarely seen without a cocktail or champagne in hand, and much is made about her legendary drinks. In one scene, Wallis and Edward drop Benzedrine into champagne and then act high. Evgeni also smokes, and he and Wally have vodka. Several dinner parties have lots of drinking. Wally takes fertility drugs, which she injects herself with throughout most of the movie.