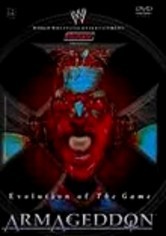 2003 TV-14 3h 15m DVD
The biggest names in WWE wrestling go toe-to-toe with three championship titles on the line in one awesome event. Goldberg, Kane and Triple H take on each other in a Triple Threat match for the World Heavyweight Championship. Rob Van Dam fights to retain his title in a bout against Randy Orton for the Intercontinental Championship. Also on the bill are Chris Jericho, Christian, Shawn Michaels, Batista, Booker T, Mark Henry and many more.