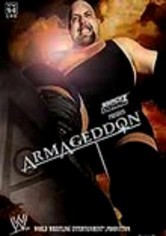 2004 TV-14 3h 0m DVD
Filmed live in the Arena at Gwinnett Center outside of Atlanta, Armageddon 2004 gathered the year's most merciless wrestling warriors for an unforgettable evening of carnage. An action-packed fight card includes matchups between Daniel Puder and Mike Mizanin, John Cena and Jesus Aguilara, Miss Jackie and Dawn Marie, Spike Dudley and Funaki, and a fatal four-way fight between JBL, the Undertaker, Booker T and Eddie Guerrero.