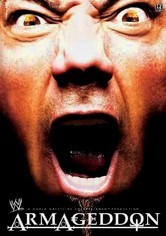 2005 TV-14 2h 0m DVD
In December 2005, Boston played host to the WWE annual Armageddon face-off ... and what a battle it was! Starring the most imposing grapplers on the globe, this spectacle of mayhem includes the much-anticipated "Hell in a Cell" match between Randy Orton and the Undertaker as well as a brutal tag-team confrontation with Big Show and Kane taking on Batista and Rey Mysterio. Additional carnage includes a clash between Kid Kash and Juventud.