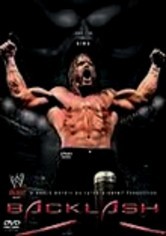 2006 NR 3h 0m DVD
Filmed live in Lexington, Ky., on April 2, 2006, this unforgettable installment of Backlash -- an annual WWE event -- dishes up more no-holds-barred action than wrestling fans could possibly hope for. Features include the WWE Championship Triple Threat Match (John Cena vs. Edge vs. Triple H); Kane vs. Big Show; Ric Flair vs. Umaga; and many more. Extras include additional interviews and footage not seen during the original broadcast.