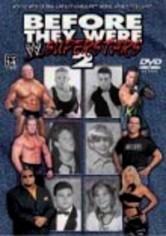 2002 NR 2h 30m DVD
World Wrestling Entertainment presents another round of mat-pounding excitement in the humble beginnings of such WWE legends as Tazz, Al Snow, Randy Orton, Torrie Wilson, John Cena, Shawn Michaels, Christopher Nowinski and Brock Lesnar. No-holds-barred interviews and exclusive footage reveal what superstars such as Rob Van Dam and Chris Jericho did before they became kings of the ring.