WWE: From the Vault: Shawn Michaels 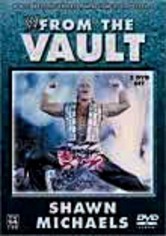 WWE: From the Vault: Shawn Michaels

2003 NR 2 discs
The life and accomplishments of one of World Wrestling Entertainment's biggest celebrities are showcased in a ringside romp through "The Heartbreak Kid's" long and illustrious career. Follow Shawn Michaels from his AWA Tag Team Championship in 1986 to his nonsanctioned Summerslam 2002 match against Triple H. An all-out slam-fest of matches features some of Michaels's fiercest opponents such as Bret Hart, Razor Ramon, Undertaker and many more.