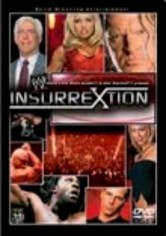 2003 TV-14 3h 0m DVD
The biggest stars of American professional wrestling take their high-impact sport across the pond to England. There's plenty at stake for the competitors, such as Christian and Booker T. as they fight for the highly prized championship belt. Female wrestlers Trish Stratus and Jazz get in on the action as they compete for the women's title. Also featured is a street fight between Triple H and Kevin Nash.