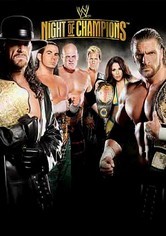 2008 NR 3h 0m DVD
World Wrestling Entertainment brings you a high-stakes night of title-determining matches in some of the promotion's top fights, including the WWE Championship, World Heavyweight Championship and Intercontinental Championship. With no shortage of smackdowns and raw competition, some of the featured wrestlers include Triple H, John Cena, Chris Jericho, Batista, Shawn Michaels and Undertaker, along with many more exciting WWE superstars.