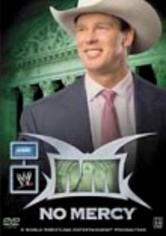 2004 NR 2h 42m DVD
It's the turntable treatment for any pencil-necked geek who thinks he can win the WWE championship and hold onto the title. John "Bradshaw" Layfield vowed he'd stop at nothing in his sacred quest to be crowned WWE Champion -- and he achieved the impossible (although he's far from pencil-necked!). Now, "The Undertaker" is playing the game Layfield pioneered … but does he have the &NFicojones&NFi_; to beat the champ?