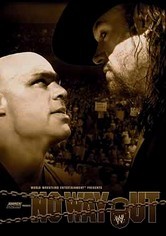 2006 TV-14 3h 0m DVD
Eight of the biggest names in wrestling step inside the ring for uncompromising head-to-head action in the annual "No Way Out" event, filmed in 2006 in Baltimore's First Mariner Arena. Matchups include brawls between self-proclaimed wrestling "God" JBL and Bobby Lashley, Chris Benoit and Booker T., Rey Mysterio and Randy Orton, and world heavyweight champion Kurt "the Wrestling Machine" Angle and the Undertaker.