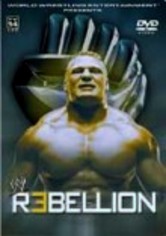 2002 TV-14 3h 0m DVD
World Wrestling Entertainment's big bruisers duke it out at the explosive 2002 Rebellion event held in Manchester, England. Jamie Noble, Rey Mysterio and Tajiri face off in a three-way challenge for the cruiserweight crown, Kurt Angle and Chris Benoit take on Los Guerreros for the tag-team title, and Brock Lesnar and Paul Heyman battle Edge in a handicap match. Other bouts include Booker T. vs. Matt Hardy, and Crash Holly vs. Funaki.