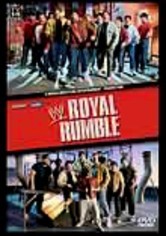 2005 NR 3h 15m DVD
Royal Rumble, World Wrestling Entertainment's most anticipated event of the year, pits 30 of the biggest wrestling stars from "Raw" and "SmackDown" against one another for a bone-crushing spectacle that's like nothing else you've seen before. Watch as 2005's top finalists -- Edge, Rey Mysterio, John Cena and Batista -- all struggle to be the last man standing in this adrenaline-charged battle for ultimate bragging rights.