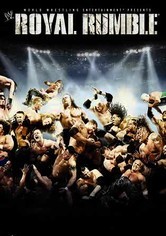 2007 TV-14 3h 0m DVD
Get a ringside view as WWE superstars battle it out at the 2007 Royal Rumble in San Antonio's AT&T Center. In the main event, Undertaker makes a last bid to finally take home the crown after eight previous defeats. Other matches include Matt and Jeff Hardy vs. MNM; ECW World Champion Bobby Lashley vs. Test; World Heavyweight Champion Batista vs. Mr. Kennedy; and WWE Champion John Cena vs. Umaga.