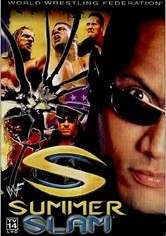 2000 TV-14 2h 36m DVD
Second in magnitude only to Wrestlemania, SummerSlam delivers an annual dose of raw, in-your-face action, and the 2000 event -- held in Raleigh, N.C. -- is no exception. The sport's biggest stars square off as the Undertaker battles Kane, Steve Blackman goes up against Shane McMahon in a World Wrestling Federation Hardcore Championship bout, and the Rock takes on Triple H and Kurt Angle in a triple-threat match.