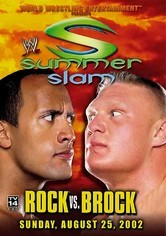 2002 TV-14 2h 43m DVD
A thrilling climactic match between Brock Lesnar and reigning king the Rock for the WWE Undisputed Championship caps off an explosive drama-filled night at the 15th annual WWE SummerSlam in Uniondale, N.Y. Also, Shawn Michaels and Triple H -- of the Raw brand -- mix it up in an Unsanctioned Street Fight. Other matches include Kurt Angle vs. Rey Mysterio and Ric Flair vs. Chris Jericho.