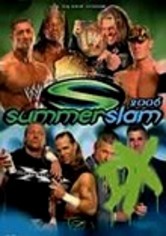 2006 NR 3h 0m DVD
Boston's Fleet Center is the site for this superstar event held in the summer of 2006. Featuring stars from Raw and Smackdown, this video includes footage not seen during the pay-per-view telecast. With some of the biggest names in wrestling stepping into the ring -- including John Cena, Rey Mysterio, Triple H, Sabu and the legendary Hulk Hogan -- and three championships up for grabs, this slam is the biggest blowout of the summer.