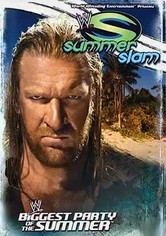 2007 TV-14 3h 0m DVD
The action inside the Meadowlands Sports Complex is rougher and louder than ever in this 20th anniversary celebration of the WWE's annual SummerSlam. Highlights include matchups between some of the biggest superstars of WWE Raw, SmackDown and ECW, including John Cena, Batista, Bobby Lashley, Edge, Randy Orton, Kane, Chris Benoit, Matt Hardy, Jeff Hardy and many more.