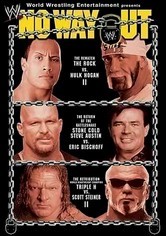 2003 TV-14 3h 0m DVD
Some of the WWE's biggest superstars butt heads inside the ring in this special event filmed inside the Bell Centre in Montreal in 2003. Highlights include an all-star altercation between the Rock and Hulk Hogan, a battle for the World Heavyweight Championship between Triple H and Scott Steiner, and a four-way fight for the World Tag Team Championship featuring William Regal, Lance Storm, Kane and Rob Van Dam.