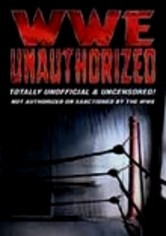 2006 NR 1h 0m DVD
Vince McMahon Jr.'s grappling empire is the subject of this hourlong behind-the-scenes documentary that looks at the people and the strategies that bring World Wrestling Entertainment to stage and screen. Viewers have a chance to hear from writer Vince Russo, the mind behind the character of the Rock and other famous WWE personalities. Experts from the worlds of wrestling, media and medicine provide commentary on life inside the squared circle.