WWE: Undertaker: He Buries Them Alive 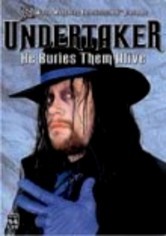 WWE: Undertaker: He Buries Them Alive

2003 TV-14 1h 0m DVD
WWE megastar the Undertaker earns his name by mowing down opponents and sending them to an early grave. This compilation features five of the 'Taker's best battles, including Casket Matches against Yokozuna and Jerry "The King" Lawler. Also featured is the infamous "Undertaker vs. Undertaker" match from the 1994 SummerSlam. Ted DiBiase hosts this retrospective of the triumphs that made the Undertaker the most feared wrestler on the planet.