WWE: Vengeance: Hell in a Cell 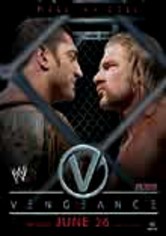 WWE: Vengeance: Hell in a Cell

2005 NR 3h 0m DVD
World Heavyweight Champion Batista battles undefeated Hell in a Cell superfighter Triple H in this steel-caged match to end all matches. Featuring a ring enclosed in a gigantic cage made of unyielding steel, WWE's Hell in a Cell matches require fighters to endure one of the most brutal environments in sports entertainment. In this bout, Triple H and Bastista battle it out using brute strength, fight skills and some unorthodox steel weapons.