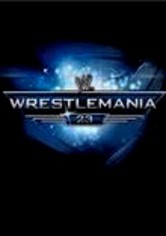 2006 NR 3 discs
On April 1, 2007, WWE's annual blowout drew a record crowd of more than 80,000 to Detroit's Ford Field. The action opens with wrestling legend Ric Flair in a tag team bout and Mr. Kennedy grabbing the briefcase in the Money in the Bank ladder match. Then, the Undertaker and John Cena vie for the World Heavyweight and WWE Championships, respectively. Also included is the infamous Hair Match pitting WWE kingpin Vince McMahon against Donald Trump.