WWII: A World in Conflict 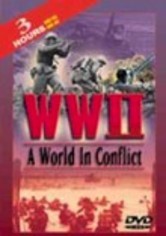 WWII: A World in Conflict

2000 NR 3h 0m DVD
Explore the major events and significant players of World War II through this historical documentary that chronicles the Japanese invasion of Manchuria, the Nazi attack on Poland, the bombing of Pearl Harbor and much more. Through rare archival footage, viewers can witness the tortuous Bataan Death March, the destruction of major international cities and important strategy meetings between world leaders.