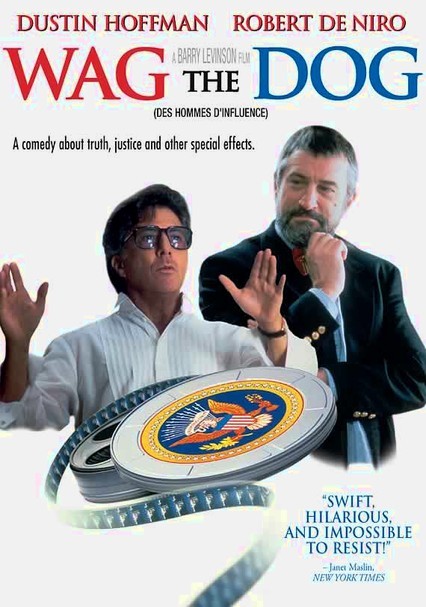 1997 R 1h 37m DVD
When the president is caught in a sex scandal less than two weeks before the election, White House spinmaster Conrad Brean (Robert De Niro) creates a phony war with the help of Hollywood producer Stanley Motss (Dustin Hoffman) to distract the electorate. From acclaimed director Barry Levinson and writers Hilary Henkin and David Mamet comes this biting look at American politics and its insidious relationship with the media.

Parents need to know that the president is accused of molesting a teenage girl. All of the main characters lie and work to defraud the voters in order to have their candidate re-elected. A woman sleeps with a man in order to advance their conspiracy. Conrad has a producer killed when he threatens to reveal the faked war.

A White House staff member sleeps with a member of the press to advance their conspiracy. She's shown in bed draped in a sheet.

Two people are killed off-screen. It's implied that a sex offender attacked a farmer's wife. The president is accused of molestation.

A group of White House staffers conspires to defraud the American public so they can keep their candidate in office.

Some drinking and smoking cigarettes and cigars by adults.